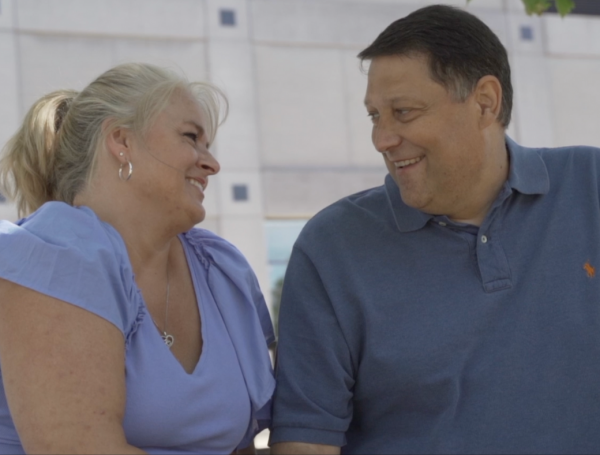 “Rejuvenate opened my eyes to the chance I could get a transplant.”

Kidney transplant recipient Dan Kyslinger says his outlook is 180 degrees from where it was several months ago, before his transplant.

The Georgia husband and father of two was receiving dialysis three times a week – each Monday, Wednesday and Friday – before the team at Rejuvenate Kidney Transplant Solutions helped facilitate his lifesaving surgery.

“I was useless,” says Kyslinger. “I’d come home from dialysis, and all I could do was sleep.”

“I can conquer the world,” he says.

Kyslinger was diagnosed with an inherited form of kidney disease, known as polycystic kidney disease or PKD, while in his 30s. He and his wife, Cindy, were enjoying a busy life with two young children when he passed blood and knew something was wrong.

“They did scans of my abdomen, and they found I had thousands of cysts on my kidneys,” says Kyslinger. “It was mind-altering and life-altering to me because I knew my life had to change.”

Although he knew there was no cure for PKD, Kyslinger didn’t initially plan on getting a transplant. However, as time went on, it became more of a possibility.

“I knew I needed to get rid of them or they were going to end up killing me,” he says.

Kyslinger asked his physicians about joining the national transplant waiting list but was told he didn’t qualify.

“They said, ‘You haven’t hit that threshold of your kidney function being low enough to go on the list,’” says Kyslinger. “But we would look at the images, and there were cysts everywhere.”

He was struggling mentally and physically when he received a call from Sue Rees at Rejuvenate Kidney Transplant Solutions.

Rejuvenate helps people with kidney disease navigate the confusing and often frustrating path to transplant so that they can get back to living life to the fullest.

“Rejuvenate opened my eyes to the chance I could get a transplant,” says Kyslinger. “Sue is so positive. It’s not can this happen? It’s when this happens.”

“The most amazing thing to me is that I was listed on a Wednesday as far as being eligible for a kidney transplant, and then on Sunday, I got a call that I was third in line to receive a kidney.”

Kyslinger flew to Toledo, Ohio, for a blood test, knowing there was a slim chance he could return home to Georgia with a new kidney. That’s exactly what happened.

“The first person couldn’t accept the kidney because they were not a match. The second person declined and had their own reasons for declining,” says Kyslinger.

Whether you are a benefits manager, or someone, like Dan Kyslinger, who suffers from kidney disease, know that Rejuvenate has helped thousands of people access kidney transplants sooner. Rejuvenate partners with brokers, benefits consultants, captives and self-insured employers to transform lives and greatly reduce healthcare costs from kidney failure by creating opportunities for kidney transplants.

Schedule a needs analysis today to learn how Rejuvenate can help.