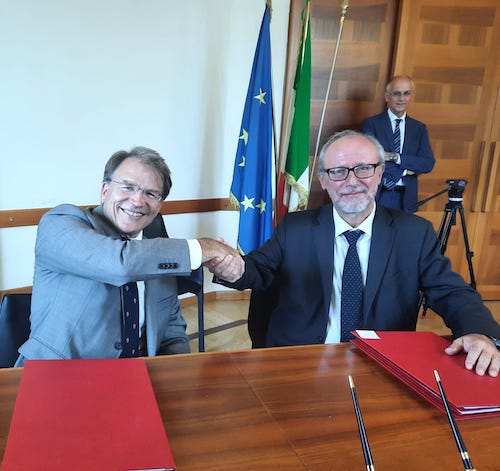 The Alliance for Paired Kidney Donation (APKD), an Ohio-based, non-profit organization managing an international kidney exchange registry, announced the launch of a pilot kidney exchange transplant program between the United States and Italy. The signing of the agreement, between APKD and Centro Nazionali Trapianti (CNT), the organization which manages all transplantation activity in Italy, allows for the first-ever exchange of living donor kidneys between Europe and the United States.

The agreement was signed on behalf of CNT by its director, Massimo Cardillo, and by Michael A. Rees, CEO of APKD, the surgical director of kidney transplantation at the University of Toledo Medical Center in Ohio and the CEO of Rejuvenate Kidney Transplant Solutions. The goal of the memorandum of understanding, which was signed at the Ministry of Health in Rome, is to provide for the possible treatment of thousands of patients awaiting kidney transplants in both the U.S. and Italy.

The new US-Italy program concerns kidney exchange transplantation, in which incompatible living donor and recipient pairs are matched with other incompatible pairs for kidney transplants. Thanks to the agreement between APKD and CNT, incompatible American and Italian donor-recipient pairs will be able to exchange with each other based on a shared algorithm that will verify the level of compatibility between those on the countries’ transplant waiting lists. In this way, patients with kidney failure, who also have an incompatible volunteer donor, will have a greater chance of receiving the transplant they need.

In addition to the technical-operational aspects – such as the requirements of the participating hospitals, matching algorithm and overall governance of the transplant process – the agreement provides that the costs related to the transplant procedure are borne by the U.S. insurance coverage for the U.S. recipient and the Italian donor, while the Italian National Health Service will cover the expenses for the Italian recipient and the American donor. Transplant surgeries will take place in the country where the recipient is located.
The pilot phase of the program will cover the first three cases and will be limited to one hospital in Italy, while in the U.S., chosen APKD partner transplant centers will be accepted into the program with the approval of CNT. Once the initial operational and management process has been completed, the program will be re-evaluated for possible consolidation of the protocol and the progressive expansion to other living kidney transplant centers of the Italian and APKD networks.

The agreement with Italy is the latest example of APKD’s global leadership in the field of kidney exchange. In late 2021, the organization also helped coordinate a historic series of kidney transplants between donors and patients in Israel and the United Arab Emirates that saved the lives of three women.

This agreement would not have been possible without the support of Dr. Ignazio Marino. Marino, a Starzl-trained transplant surgeon, former Italian Senator and former Mayor of Rome, understood both the enormous opportunity and the best path available to navigate this agreement to its successful conclusion.

“Kidney exchange helps us celebrate our differences – for the benefits they enable,” said Rees, CEO of APKD. “Larger pools offer more opportunities for kidney exchange for the incompatible pairs in those pools. But an often-overlooked aspect of kidney exchange is that patients with antibodies that prevent their donors from donating are often produced against targets that are common within their ethnicity or population. Kidney exchange shows us how our differences can be the critical component, allowing us to help one another by providing donors that lack the targets of such antibodies.”

Rees goes on to note that: “We believe the heterogenous U.S. population will allow the homogenous Italian patients a much better chance of finding a match than working with similar populations in Southern Europe.”

“Living kidney transplants are an effective therapeutic option for recipients and absolutely safe for donors, but to date, they represent less than 17% of kidney transplants performed each year in Italy,” said Cardillo, CNT director. “This is a rapidly growing percentage but still insufficient to respond to the many patients still waiting. This agreement between Italy and the U.S. literally opens a new frontier and will allow us to significantly increase the chances of establishing positive matches between different patients.”

The final goal, continues Cardillo, is an international network of paired exchange kidney transplants. “Starting from this experience, we will be able to work for a cooperation agreement between all European countries that will allow us to internationalize kidney exchange programs for the benefit of all patients.”
The full announcement by CNT, including a response from Italy Undersecretary of Health Pierpaolo Sileri, is available on CNT’s website.

To learn more about APKD and its industry-leading kidney registry, visit PairedDonation.org.